We all know soy is a staple food in various Asian countries and many of us already know soy is unhealthy, but few know just how diabolical soy actually is. Japanese researchers noticed when male fish were fed soy isoflavones, which is a major ingredient in baby formula, they all turn into “females”! I know, it sounds like a sci-fi movie, but it’s not.

Can you imagine being born a male, then being fed soy isoflavones, and you turn into a female? If only the male fish could talk…

And this has already been commonly known within the fish growing industry for years –no wonder now fish growers purposely feed soy isoflavones to their male fish to turn them into female fish, because the females grow faster, are bigger and of course will soon reproduce. It’s tough being a male. So, what else can toxic soy do? 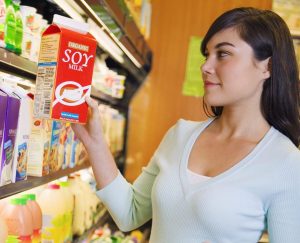 And soy products are everywhere and soy is in everything these days!

Now that you know eating, drinking and of course injecting soy, if you have ever read any vaccine ingredients recently, will definitely expose you to high amounts of these dangerous phytoestrogens.

And these phytoestrogens continue to accumulate in your organs throughout your lifetime, especially your thyroid, disrupting all sorts of hormonal functions.

Soybean oil is also a serious problem, but for a different reason. It contains carcinogens that cause dysregulation of the oxytocin system, which leads to disruptions in empathy and social bonding.

This is perhaps why many no longer have any sense of what it means to love others or show any compassion.

It is very sad that people eat and drink soy every day, especially Americans, which is destroying their bodies, brains and emotions.

Now let’s talk about that pervasive additive called soy lecithin, which is used in all chocolate products and thousands of other products you find on store shelves.

Why is soy lecithin so commonly used today? Because it is also an emulsifier or a thickener –and we both know how important it is that chocolate be thick, otherwise why bite into it in the first place.

But does chocolate and so many other products have to poison you just so you can enjoy them? It appears so.

Now after knowing all of this about soy, it begs the question, why is soy so toxic? The internet already provides this answer, but it’s a very misguided answer that only irritates the well-informed, like myself.

The answer provided everyone online as the reason why soy is so unhealthy is because again it contains high levels of phytic acid and phytoestrogens, both of which are toxic to everyone who consumes them, but this does not answer the question why soy became toxic?

It’s not like the toxic soy today was already toxic 3,000 years ago, so again, why did soy become toxic? what changed? I will tell you what changed, modern poisons.

You see, every plant has their own natural immunity to whatever nature happens to throw at them, but since artificial poison was introduced into the environment, well over a century ago now, the natural immunity the soybeans once had was constantly weakened by pesticides, herbicides, fungicides, toxic fertilizer and of course GMOs, so the once healthy soybean became toxic to everyone who consumes it, just like every other contaminated plant.

So, “it’s toxic because it’s toxic” is not an answer to anything.

Now, you might quickly assume certified organic soybeans are surely pesticide-free and GMO-free and therefore are not toxic at all, but the organic certification only applies to 95% and not 100%.

This means there is 5% artificial chemicals in all organic soy and organic soy products, which also turns the soy into dangerous phytoestrogens that also include the nutrient stripping processes all soy must endure, even the organic soy that renders that soy nutritionless or as I like to call it, dead food.

There’s just no way you can eat healthy soybeans and especially not after it was thoroughly processed into a glob of soy lecithin.

But don’t worry that you can’t consume soy, because there’s literally a hundred other different kinds of beans out there that are not as toxic as soybeans.

So please, whatever you do, avoid anything with soy in it and start eating MealBetix so your thyroid and all your hormones can finally start to heal.