All across the country there is a huge shortage of formula after many baby formula factories here have been destroyed, which is now motivating many baby formula brands to sell their formulas on the black market for 5 times the regular price.

This means millions of worried Mothers are trying to figure out how to feed their babies other ways, so I have a suggestion –feed them real food!

If for some reason the Mother cannot nurse their child, which is the healthiest food source for their baby, or cannot make their own formula, then perhaps it’s best to feed babies the last 100% Clean raw food on earth!

If there was ever a time to feed babies the healthiest food on earth, it would be exactly right now!

While the shortage of formula continues and the price skyrockets, you do not have to worry about what to feed the babies, because The MealBetix Lifestyle is here.

And what’s even better is the fact that MealBetix is also in powder form, so you can mix with water in any baby bottle quickly and easily.

There isn’t a single baby formula out there sold in any store that is 100% Clean, let alone raw, which is the closest to real Mother’s milk. 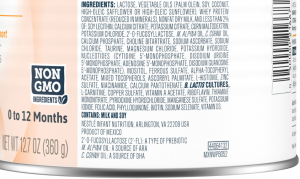 And have you ever read the ingredients on some of those formulas? It feels like you’re reading an artificial chemical list and not a list of foods to feed babies –it’s just downright shocking what all those baby formula makers get away with.

Just look at the ingredients in this typical formula label..not a single food is listed at all!

And even if there was food listed, it would not matter in the slightest, because everything else is artificial, which contaminates the food!

It is clear all the baby formula makers do not care about helping babies’ health, otherwise they would never add a single artificial ingredient in anything you feed babies.

What happens to a baby who drinks artificial chemicals every day? Serious respiratory and neurological disorders will develop, including ADHD!

But even worse than those symptoms is the risk of babies developing cancer, leukemia, brain tumors and other terminal illnesses, especially when their immune system is at their weakest.

This should be a time when we protect the development of our children, not a time to feed them artificial chemicals that will destroy their already underdeveloped immune system, causing them to develop terrible diseases.

Just a side note…when Rockefeller became the AMA’s President way back when, he injected millions of dollars of his own money into the development of petroleum-based ‘medicine’ to give to sick patients, which he used as guinea pigs of course.

And when they started developing cancer, because that’s what happens when you feed someone petroleum or artificial chemicals, instead of realizing all the harm he caused and stop what he’s doing, he created The American Cancer Society in 1913 to find a cure! 😮

From that point on, everything that was taught in Medical Schools and eventually every other school, was an education based on the same allopathic viewpoint, and artificial drugs, artificial nutrition and even artificial food, which is what junk food and fast food are, is now the mainstream education all over the world.

That’s why even if you could graduate from 10 medical schools, you will always only learn the same allopathic viewpoint.

But back to the shortage of formula, which I think is a good thing actually, because it is forcing some Moms to rethink what to feed their babies.

Some Moms to save money, are steaming vegetables and then mashing it into meals for their babies or just juicing for their babies and adding the juice to the baby bottle, which is not only cheaper than baby formula, but a lot less toxic for sure.

Now, if those same Moms realized the clean vegetables at least have far less pesticides, herbicides and GMOs than all the conventionally raised vegetables out there, then at least they would be well ahead of everyone else and on their way to actually helping their baby’s health.

But do you know what’s even cheaper, faster and far healthier than making your own clean baby food?

Mixing MealBetix in your baby’s bottle instead!

The MealBetix Lifestyle will not only help your baby’s immune system grow stronger, but will constantly clean out any artificial chemicals that infiltrated your baby’s body, either directly or indirectly.

There are 15 superfoods in MealBetix and each one will thoroughly rejuvenate every cell in the body. And with more protein than steak, you can expect their muscles to grow stronger, quickly improving their coordination and stability.

So, ready to feed your baby the last 100% Clean and raw baby formula on earth?

And of course no soy, no corn, no wheat, no sugar, no artificial chemicals, no artificial nutrition or anything else that is not 100% Clean and raw –truly the last food here that can save your baby from the artificial world we live in.