Millions here and billions more around the world, live with some sort of skin disorders autoimmune, but have no way to actually reverse it.

And the ‘treatments’ are all just immunosuppressants that weaken your immune system and leave you vulnerable to viruses and infections.

Now, how many skin disorders are there? 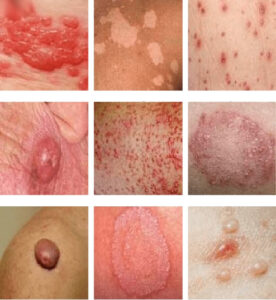 There are more than 3,000 identified varieties of skin disorders and diseases that can cause symptoms ranging from simple burning and itching and severe emotional and social effects, to physical disfigurement and even death.

And even the alternative or natural skincare industry provides a slew of skincare products, but have you ever noticed the ingredients in all these popular “natural skincare” products?

They, too, are full of toxic chemicals, petroleum byproducts and a slew of carcinogens.

And just because there are “less toxic chemicals”, they can call it “all natural”, which is a claim that has never been regulated or controlled in any way, so anyone selling pure poison creams in a pretty bottle could slap that on their label if they want.

False. For example, there is no eczema gene, no psoriasis gene, no vitiligo gene, no acne gene, and so on..

In other words, your skin is a reflection of your blood.

At this point, you might be saying to yourself, “but my friend smokes, drinks and eats junk food every day and yet their skin looks absolutely fine.” Well, that’s because their immune system hasn’t weakened yet, but once it does, you definitely do not want to be them.

In my opinion though, I would rather have a warning of what is coming and prepare for it, which is the only benefit that I can think of when having a weaker immune system, because if you’re one of those people who have a robust immune system all their life until they hit 65 years old when their immune system finally cracks and the floodgates of toxic waste comes pouring out, the pain and suffering you will have to endure is definitely no joke.

Now, I think anything involving lasers is cool, but not when it touches my face, because the extreme heat will surely destroy both the good cells and the bad cells, much like chemo and radiation. The theory is that when your skin heals, new good cells will appear, rejuvenating your skin, but this, too, is just a temporary fix, because it doesn’t matter what you put in your skin or on your skin, neither could ever affect the cause of your skin disorder.

It doesn’t matter what you call it, all of these are basically immunosuppressants. And this means the longer you put any of these in your body or on your skin, the weaker your immune system will become, keeping you vulnerable to viruses and infections that lead to death for so many men, women and children, every day. 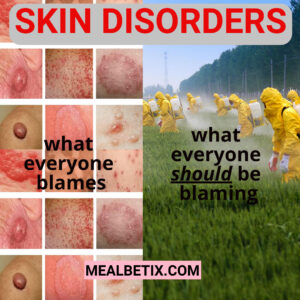 So, what is the cause of all skin disorders then? So glad you asked! You will notice in this image that everyone blames their skin for having skin disorders..I mean, that’s where the pain is, so why wouldn’t it be your skin’s fault, right?

So what’s the cause of your skin disorder?

If your Mother did not eat or drink healthy when pregnant, she swallowed pills or got herself injected with whatever was popular at the time, then you better believe you will receive all of that, too –and that’s how you started out in life.

This is why some babies are born healthy, but most now are born unhealthy and struggle just to stay alive. Why? Because we live in a very polluted world that is also filled with ‘professional people’ who get paid to pollute and contaminate other people.

I often say we live in an “Artificial World”.

Just look at how many people eat artificial food filled with artificial nutrition, then when they get sick, swallow artificial drugs they were told is ‘medicine’ –literally, there is poison all around us! It’s no wonder so many suffer from so many skin disorders.

But now that you know the truth, you can finally do something about it! Are you ready to heal your skin from the inside permanently?

Begin The MealBetix Lifestyle today and change your skin forever!